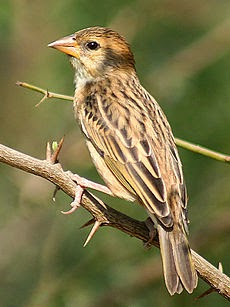 Thookanaanguruvi is called as  Baya Weaver (Ploceus philippinus) in english  is a weaverbird found across the Indian Subcontinent and Southeast Asia.It builds its nest according to vaasthu right from selecting the tree in which it is going to build its nest and direction in which the nest should face.It is a special ability of this bird.